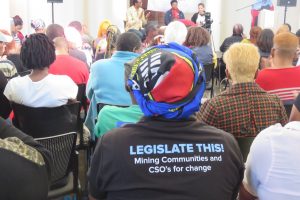 Africa is Living the Climate Crisis – WoMin
“Our politicians are selling our lives,” said Mozambican activist, Flaida Macheze of La Via Campesina at WoMin’s August 20th panel event, Africa is Living the Climate Crisis. “[They are] selling our water, our land, our fish, out timber, our forests and they are enslaving rural communities.” WoMin gathered over 100 activists from across South Africa and around the continent at the Women’s Jail, on Constitution Hill, to grapple with the state of the continent in the face of a rapidly worsening climate crisis. After the discussion, WoMin hosted a screening of its documentary film, Women Hold Up the Sky  Read more… 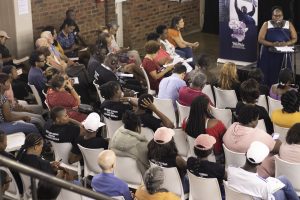 On November 12, 2019, WoMin African Alliance hosted the official South African launch and screening of our film, Women Hold Up the Sky. The event held at Atlas Studios in Johannesburg drew a 200-strong audience of activists from communities featured in the film and across South Africa, representatives from NGOs and human rights organisations, and other allies.

Three years in the making, Women Hold Up the Sky explores stories of resistance and communities in active struggle to take back control of their land, their rights, their bodies and their lives. The film follows women and communities negatively impacted by coal in South Africa, oil development in Uganda, and the Grand Inga mega-dam in the Democratic Republic of Congo (DRC) as they fight for a voice, build solidarity and act in the face of often violent repression by corporations working hand-in-hand with the State. It also chronicles their collective power as African women rising to mitigate the effect of climate change in their communities and countries.

The screening was followed by a robust discussion between the audience, a panel of activists featured in the film and Samantha Hargreaves, Director of WoMin. The discussion moderated by Yasmin Sooka, former Executive Director of the Foundation for Human Rights (FHR) saw activists Isabelle Matumona of Sekebanza Community Group (DRC), Margaret Kagole of Tullime Embibo Ezikadde Women’s Group (Uganda) and Fakazile Khuluse of Mfolozi Community Environmental Justice Organisation (South Africa) share their experiences of being part of the film. The women recounted powerful stories from their struggles and how they are organising together with other women to defend against the development projects taking place on their land.

I am struggling to have a life with my family but here comes a company that destroys everything. I mobilised my colleagues and we are saying enough is enough. We are saying women are building power. – Margaret Kagole, Uganda.

Hargreaves offered deeper insights of the journey to making the film,” back when WoMin first started to think about a documentary spotlighting the violent impacts of extractivist development in Africa, there were almost none on the continent—and certainly none that profiled the voices of African women. It was out of a desire to fill this gap, that Women Hold Up the Sky was born”. She also spoke to the need for deep solidarity in support of communities on the frontlines who are facing immense risks for their organising activities. She challenged the audience, “We have to be brave. As long as we have profit sitting at the centre, the devastation will continue.”

For Isabelle Matumona who is fighting against the Grand Inga project in DRC, the “film links the past [to] the present and our futures,” and she firmly believes that the film is an important HERstory of the courageous resistance of women who refuse to be silenced. Using the film as tool of advocacy and campaigning to mobilise her community and future generations, “we will show it to our children and our grandchildren” serves as a powerful means to raising awareness on key issues affecting them and other communities facing similar challenges.

Building on the positive reception to South African screenings of Women Hold Up the Sky, it saw the film successfully launched in Uganda on 22 November with a launch set in DRC for early next year. WoMin is taking the film even further and invites communities, collectives, organisations and allies to screen the film across Africa and beyond and will be featured in film festivals. These stories of how women are holding up the sky for us all must be heard.

Women Hold Up The Sky launches in the DRC 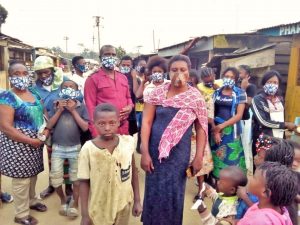 On Friday, July 24 Femmes Solidaires (FESO) a coalition of 24 women’s groups from across the Democratic Republic of Congo (DRC) brought together women and communities featured in the film. Community members from the villages of Manzi Baobab, Mvuzi 3, Kilengo, Matadi and Inga gathered together for screenings held over two days in Inga.

The launch initially planned for early 2020 was finally made possible with the lifting of the national state of emergency. Adhering to safety and hygiene measures for public gatherings during COVID-19, FESO held a successful launch to an excited audience happy to finally safely gather to watch their stories and testimonies on the big screen. The restaurant venue played host to two screenings as many people were eager to watch the film.

The construction of the Inga Dam and its impacts upon local communities depicted in the film drew the presence of government security agents monitoring any negative coverage of the Inga 3 Dam project. This did not deter the crowd who were eager to see themselves in the film. Many of them from the different villages expressed their joy and were encouraged to see their efforts positively portrayed. Others shared their thoughts and were surprised to see that they are facing similar struggles with women in other African countries saying that women must stand up to claim their rights, and for state authorities to listen to their voices.

Film festival an opportunity for Wellington to experience African culture

From the first film directed by a woman in Djibouti, to a story of rebellion in Cameroon, a film festival in Wellington will celebrate powerful African women this week.

The African Film Festival, at Wellington’s Light House Cuba cinema from Wednesday night through to November 8, will showcase African women directors, filmmakers and writers. Festival founder, Boubacar Coulibaly, said the event was an opportunity for New Zealanders to be exposed to African culture. Film subjects range from the complex history of the Ethiopian civil war to the climb of Mt Kilimanjaro in Tanzania by four Nigerian women.

After a film festival in Burkina Faso where Coulibaly met talented women willing to tell their stories, the Aucklander sought to showcase their work for a New Zealand audience.

“Their point of views are unique, they have such a different way to tell stories. “Women are always the first suffering from a situation, they are at the frontline of any conflicts or fights,” Coulibaly said.

The festival will screen 15 films, with a range of documentaries, short films, dramas, comedies and features. The festival has run in Auckland since 2015, and Wellington since 2017.

One film, Women Hold up the Sky, looks at how women have been the first affected by the pollution, loss of land and displacement in Uganda, Democratic Republic of the Congo and South Africa.

South African producer, Connie Nagiah, said the film was made with a mainly female team.

“This film shares the stories of the often silenced, ignored and erased perspectives of African women, whose experiences and struggles are part of a global story of rebellion and resistance against an unworkable, unjust, unsustainable economic, social and development paradigm,” Nagiah said.

“It was a challenging exercise from the outset as there are not many films on this subject made by and for Africans, or tells a story from the perspective of grassroots African women.

“Women are slowly getting more access to spaces, funding opportunities, and gaining recognition for their contributions to the arts and filmmaking. As African women filmmakers, we have many stories to tell about our continent in all its rich diversity.”

Another film, Dhalinyaro, was the first movie directed by a woman in Djibouti, on the African east coast.

Coulibaly was not able to pick his favourite but said ‘Musa’, screening on the opening night, particularly touched him. “She is a rebellious young woman, breaking the rules and tradition in Cameroon, she fights for what she believes,” he said.

*This article is republished from The Dominion Post, New Zealand.

This live panel discussion was held on 22 August 2021 as part of the programme ‘We Get Shot With Silent Bullets’ featuring Yaba Badoe, one of the directors of the film; Salomé Elolo, Executive Director of Femmes Solidaires (FESO) and Communications & Solidarity Coordinator Maggie Mapondera, WoMin African Alliance. The discussion was moderated by Scotland-based social justice activist Yvonne Blake from MORE Glasgow. This programme was hosted in partnership with EDI Lab at the University of Glasgow’s College of Arts, as part of their ‘The Dear Green Bothy’ event series marking the city’s hosting of the 26th United Nations Climate Change Conference – COP26 – in November 2021.